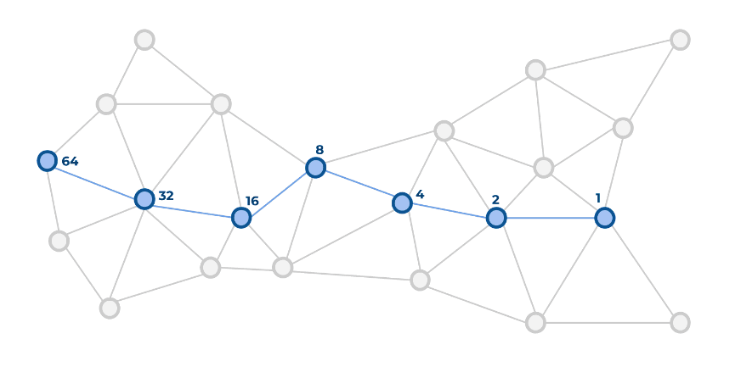 The Cost of Routing Paths

Adding cryptographic signatures to Saito transactions eliminates the 50 percent attack, but increases the size of transactions. Given that adding a single hop to a routing path is around 135kb, we can see how transaction size grows with routing length:

This growth is not fast enough to make Saito more expensive than other blockchains. Why?

Halving the Saito fee and adding a 50 percent network-support surcharge to Bitcoin puts the per-byte-cost of using the Bitcoin network 300 percent higher than Saito, ceteris paribus. Saito starts getting uncompetitive at the 5-hop mark. Meanwhile, the average node distance in the Bitcoin network is around three hops.

We expect short routing paths in Saito given the way the network incentivizes efficient routing and incentivizes nodes to compete for transaction flow by offering fast inclusion. Many applications will also use zero-and-one-hop fee strategies to deliberately minimize costs.

With that said, the real cost-savings the network offers come through the use of the transient blockchain. Saito’s self-pruning blockchain prevents network costs from growing over time like other blockchains, while permitting throughput at the scale needed to achieve economies of scale in network infrastructure. It also allows users to minimize fees by paying for only one-loop through the chain.