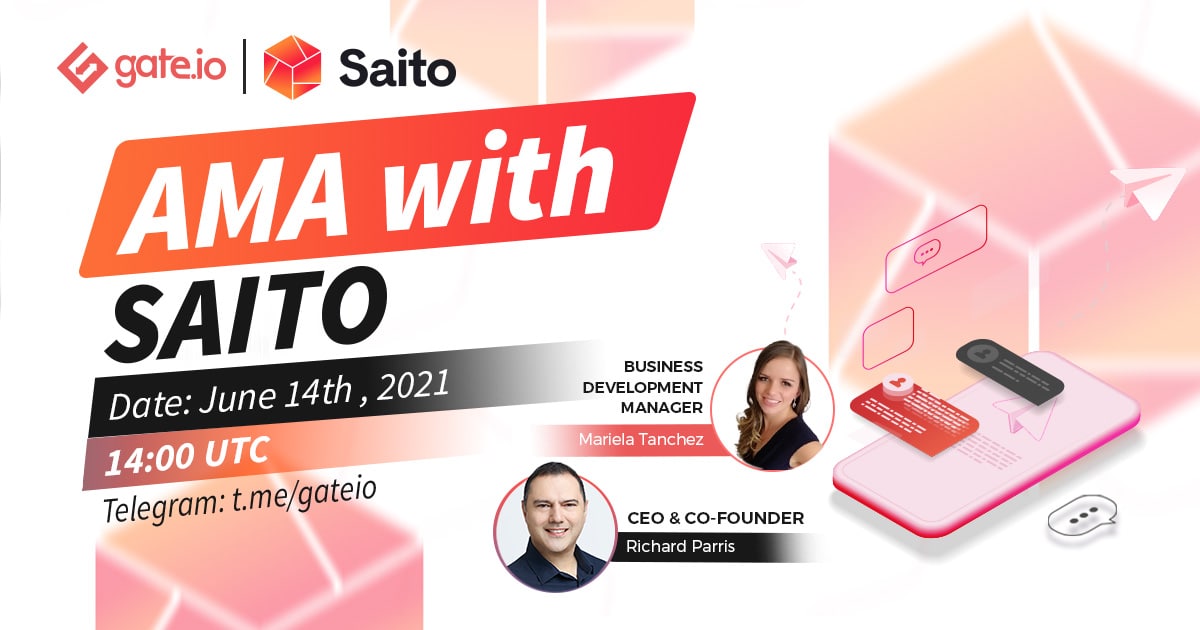 Our CEO & Co-founder, Richard Parris, had an AMA with Gate.io on Telegram at 22:00 on June 14, 2021 (UTC+8). If your goal is to learn more about Saito Network, our vision for a scalable network capable of powering decentralized versions of Twitter, Facebook and Amazon without the need for predatory monopolies in the network layer, how we’re actually making that happen, read on.

1. Tell us about how you entered the crypto space and how your background contributed to your early successes.

David Lancashire and I have been involved in the Beijing technology scene since the early 2000s. David studied computer science, economics and Chinese in Toronto and Berkeley. I studied mathematics and philosophy at the university of Melbourne.

We both got into the Beijing Bitcoin scene back in 2012 and 2013 and became friends at Beijing bitcoin events.

Back then the space was really undefined, would bitcoin be money or something more like web3? There were no forks and no Ethereum.

We met a lot of great people back then, many of whom are part of Saito or have helped along the way.

Most importantly the very idea for Sato was forged in WeChat groups and with early bitcoiners. Watching the bitcoin community split along the lines that eventually separated off BCH then BSV.

2. What is your project exactly and can you tell us more about your vision?

Our vision is massive scale, without sacrificing openness.

Saito is an open network layer that delivers web3 to users. Applications on Saito can run without closed plugins, private APIs and non-open infrastructure. Saito runs without an owner while funding the nodes that provide routing and user infrastructure for its own network and other public blockchains.

All this is powered by an entirely new blockchain design – Saito consensus.

Saito consensus is unique as it pays for what networks need to scale. By paying for nodes to collect fees from users and routing them into blocks, Saito consensus solves the biggest hurdle to open scaling – paying for large scale infrastructure without brining in corporate business models and web2 structures.

Saito is also more secure than PoS and PoW. Using collecting fees as ‘work’ eliminates the 51% and other economic attacks. Best of all Saito also has lower ‘gas fees’ as it is always cheaper per byte. Securing the network with routing eliminates payment for Mining or Staking, halving cost to users.

We are web3 through and through – and are working toward an open internet corporations cannot use their financial power of business advantages to exclude and control.

3.What are some of the major milestones you guys have hit so far and why are they important?

David convinced me to join him and co-found Saito in late 2017. He had some ideas and very early prototype software.

In 2018, we created legal entities, raised a seed round and got to building SAITO.

In 2019 we launched a test net. Tested and benchmarked it, and took what we learned and reimplemented the protocol.

In 2020 we launched a ‘canary network’ to explore building software on Saito. We built social, enterprise and gaming software on the network and have a growing community. Saito Networks have transmitted over 12 Million transactions.

Importantly, as part of building the games – we created a novel game engine. We proposed open sourcing this for the web3 community to the web3 foundation and received a grant for this in November 2020. This introduced us to a huge audience and continues to help the project.

Since then we have IDOed and launched an ERC20 token that makes it simple to buy and use SAITO. We have also set up partnerships with Crust network, Stack OS and Mixin and continue to support Skyepanda – a Australian/Chinese open marketplace project.

4. How has your community grown since you first launched?

The Saito community has been building since the launch of our first network. We have always tried to build software people can use – to help explain web 3 and how Saito supports it.

Of course the games were an early attraction and we have built up communities around these. This increased as we refined and improved the network and today creates 30 to 50k transactions per day on the network.

In April this year we added an IDO to this mix. This has catapulted the community forward and grown it immensely.  We now have a growing telegram and twitter following as well as independent communities on reddit and discord.

We are starting an ambassador program, and working hard to include our community in everything we do.

5. Can you tell us more about your business model?

Saito itself does not have a business model – just like bitcoin and ethereum do not.

Saito has a simple but powerful economic model. Unlike Mining or Staking money does not flow out of the system. Instead a very powerful circular economy develops, where providers earn in SAITO and users either need to buy SAITO directly or get them from Advertisers etc to pay for services.

Saito’s token ecosystem is simple but powerful.  Let’s use an example most people won’t think of when they think web3.

One of Saito’s great features is the ability to quickly create a light wallet in the browser.  This is so simple it can be done – one per tab.

This creates a world where each tab creates a wallet that gets a small payment from an advertisement that funds the user’s browsing till the tab is closed. When the tab is closed the wallet can be destroyed. If the user does not mind being tracked a little they can send any remaining money to a permanent wallet. If they want complete freedom from tracking they can burn the few cents or donate it.

This solves many problems delivering the web3 promise of better privacy and user control of their identity and data. At the same time it creates a way for users to browse for free while doing that. And, creates a way to pay for services, like say listening to a song without signing up for anything.

Best of all because the ‘middle man’ is taken out of the relationship between the user and advertiser – the user gets much more benefit for their attention.

6. What are some of the competitors you’ve identified (crypto or non crypto) and how are you different?

There are many approaches to scaling in the blockchain space. Eth2/NEAR Protocal and to some extent Polkadot, choose sharding and optimisations. EOS/ICP/Polygon use controls on block production to speed things up. DAGs, Avalanche and other structures lose properties like universal broadcast (anyone can send anyone else a transaction without an intermediary).

Saito Consensus is different. Saito solves a critical piece of the puzzle, none of the above addresses. How do we pay for the high bandwidth network that massive scale requires without a volunteer network (bitcoin), Infura (ethereum), google, amazon or tencent stepping in.

As a blockchain network, rather than a blockchain ledger or evm, Saito is alone in offering a solution for open infrastructure at massive scale.

The projects mentioned above are competitors for ‘mind space’ but we believe over time people will come to see their ultimate success as dependent on Saito based solutions to infrastructure for the open web.

7. Where are you heading in the next few years and what are the next major updates for you?

Community growth. Usage continues to grow on our canary network and we will continue to grow this ahead of main-net. This is key to providing an audience and users to developers.

Developer on-boarding. We are working hard to extend and improve the on-boarding experience for developers wanting to create aps and businesses on Saito.

Partnerships form a huge part of Saito’s growth model. We have great existing partnerships and will continue to expand these to

8. What have you thought of the recent price action?

I am incredibly enthusiastic about what we have seen from the market and think we are stepping into a phase we have not seen before.

We had a ‘frothy’ peak driven by memecoins and pure hype that drove the market to unsustainable levels with unsustainable speed. We have seen a correction – but not a crash.

This is great news for projects, like Saito, with great fundamentals. All that ‘noise and heat’ has attracted a lot of new people to get interested in blockchain and associated technologies and developments.

That audience is educating itself and looking for value and real innovation. This has laid a great foundation for Saito over the coming year.

9.How do you feel about the industry at the moment and where do you think you fit in?

It is so hard from ‘the inside’ to understand how new and experimental things still are.

Defi, is the ‘vanguard’ of innovation and experimentation. It’s not all perfect but it is a We great way to see what is possible to me.

To me, Defi is to web3 what internet banking is to the internet. An important part of the whole – but only a small part. Everything we do online is moving toward disintermediation – getting rid of the middle-men that charge fees, and require complete control in exchange for access.

The business models, and services and tools that are possible when that happens are still not fully imaginable. For us ‘old timers’ we all remember that feeling – the first time we sent bitcoin, and realised that we didn’t need permission from anyone.

That is coming to all of our online experiences.

Saito supports developers to create open business models for their apps and services, and users by keeping the network cheap and open.

Saito is the perfect partner for parachains, and other layer one blockchains letting them scale their user facing services efficiently, by taking transactional data and bandwidth off chain.

For more updates, please keep up with Saito social media