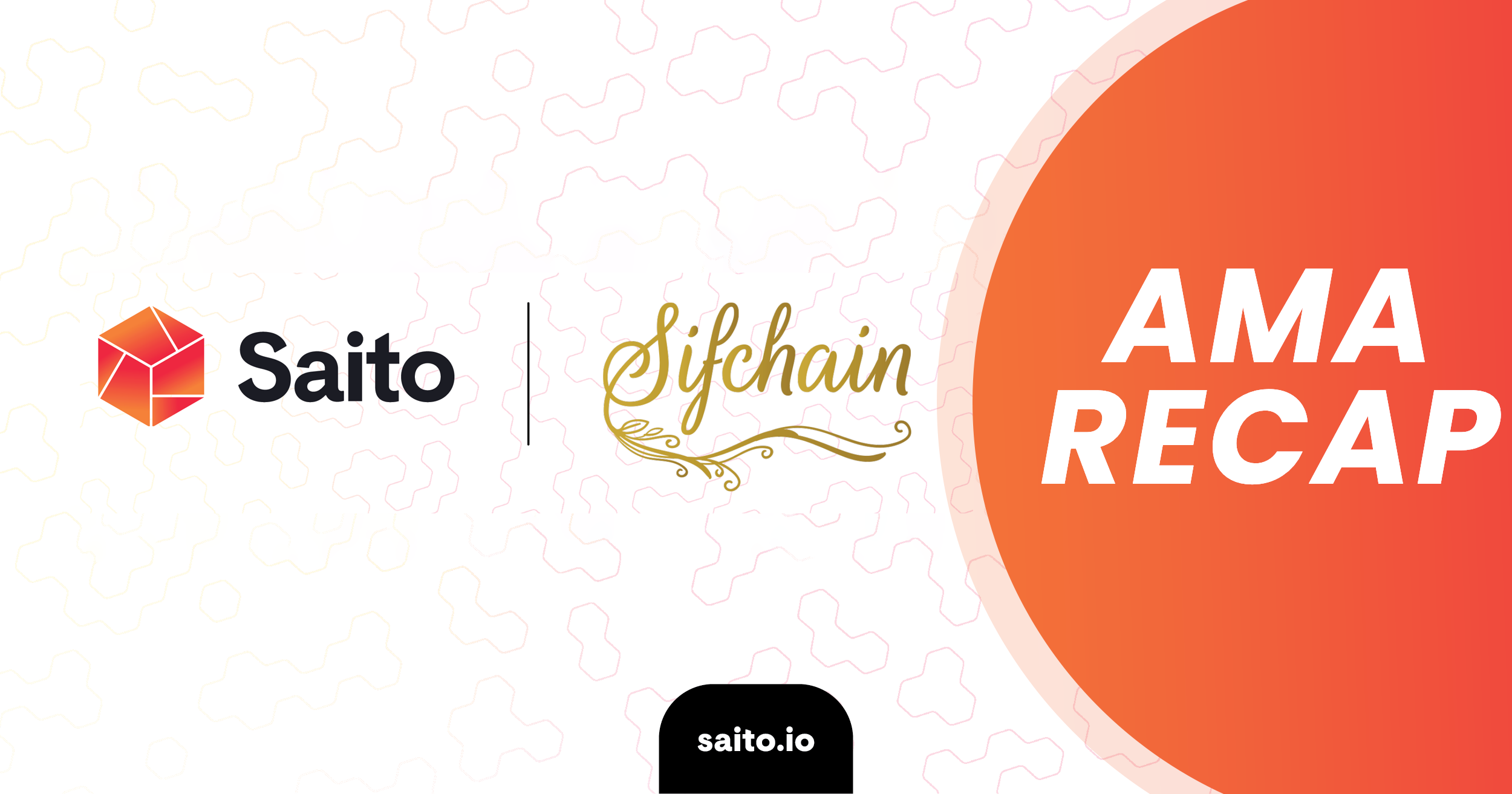 We are excited to announce that Saito is now available on Sifchain. Our co-founder Richard  Parris held an exclusive AMA with Sifchain on Telegram at 13:00 on October 15 (UTC).

We are very pleased to share that the AMA was a huge success, and Richard got to answer many awesome questions. To those who missed the AMA and to those interested to learn something about Saito, stay tuned as we curate his answers in this AMA recap.

Q1: What are you hoping to get out of the partnership – why does it matter to Saito?

When you start a project like Saito, all you want is that someone notices, and pays attention. When you start to build a community, it means everything to the project. I am really excited about the partnership for two reasons.

One is to join our communities together; to introduce the Saitozens to what is happening on Sifchain, and to meet all the folks here and let them know what we are doing.

The other is pragmatic. When I got into bitcoin (2013), exchanges were just starting to take over and dominate the space. And we took it for granted that companies like Huobi and Bitfinex and Okex would dominate the space. Some of us were into Bitcoin as money, and others were more excited by the idea of web 3.0./ That was the real draw for me.

No matter what you were interested in, you were stuck with exchanges and centralized infrastructure for most things though. Now we have real innovation going on creating decentralized (and affordable) ways to transact and share monetary and other value.

Glad to be bringing more options to our community.

Like I said before, when Bitcoin came along, it was cool to have independent internet money, but what struck a lot of us was how amazing it was to have an independent network, one that could pay for itself. That, really, was the birth of the ideas people call ‘Web 3.0’… a user-owned and independent web. Problem was that was, that Bitcoin barely scales, and it was pretty clear within the Bitcoin community that this was an issue.

The first ideas for Saito were formed during the ‘blocksize war’ when the bitcoin community was splintering and Ethereum was new on the scene. David, my co-founder, had a unique take, and asked a question most people ignored: .’If we can scale technically, web 3.0 still involves huge numbers of servers in data centers, who is going to pay for that…?’’

Proof of Work and Proof of Stake pay only for mining or staking. Both rely on volunteers to run the actual network. Individuals for BTC and Infura for ETH, as examples. Saito is a different kind of blockchain – a network, not a distributed ledger – that solves this problem. Saito pays routing network nodes for their work, not miners or stakes. So it scales economically. This is important for web 3.0 as it lets us keep everything independent.

We have a live network that demonstrates how this comes together at satio.io/dotarcade,  where you can use Polkadot tokens on the Saito Arcade.

Q3: What are you most excited about at the moment?

A few things. We did an IDO earlier this year, it was a real wake-up to just how much is happening in the industry. As a project using decentralized tools like Uniswap, and not Sifchain rather than exchanges etc. is, for me, part of the Web 3.0 vision coming true. We are starting to see real services, things people can use to live, interact, run businesses etc. emerge. Combining these tools with some of the more boring uses for NTFs – like certificates of ownership, or status etc…

These come together to give us the toolkit to build the real-world applications and services people need… and want from Web 3.0. Saito being part of this is super exciting for me. Again, building the dot arcade stuff and seeing how we can support other projects to ‘stay open and stay Web 3.0’ is really motivating for me. So, really excited by the maturing of the industry and the variety of projects and ideas out there.

Q4: What are people building on Saito? How does that work without smart contracts?

Saito is quite different from what most people in this space are used to.

It is simplest to understand Saito as a network – not a database, or information store.

Users on Saito are identified with keys they create and own, and applications they use can use these to establish on and off-chain encrypted communication. The important thing is ‘universal broadcast’ and having enough space in transactions to send real data.

The first of these is an essential feature of Bitcoin and all real blockchains.

You can send a message (usually money) to anyone on the network without permission, you just send it to their key. If you can do that, and your message can have enough information in it – you can perform a key swap (technically a Diffie Hellmann key exchange) with anyone on the network and no one can stop you. This is a critical part of Web 3.0 – the basis of the independence you can bake in, so the businesses, no matter their model or techniques cannot lock users in. None of this requires smart contracts, and, in fact, would not scale if they were introduced. You can get more detail on how Saito works at saito.io so won’t go further into the weeds.

Q5: Tell us a bit about your roadmap and what is coming up for Saito? Any sneak previews?

There are a few key areas we are working on. First is the ‘data-center ready’ client. An update and battle-ready version of the node software. At the same time, we are continuing the work we did to create the dot arcade to extend our ability to support other cryptos and NFTs simply and easily in Saito apps.

We are also really dedicated to growing and serving our community. Our partnership with Sifchain is part of that, and we plan to keep up this work, picking up development partners and growing our base.

We also don’t take our eye off the everyday things, like growing our team, and the people contributing to the ecosystem.

Q1: If a crypto newbie came and asked you “What does Saito do?” how would you answer in simple terms? Also, do you think the problem Saito is trying to fix hasn’t really started appearing?

Saito is a high capacity data network that pays for itself.

Is the quickest answer.

The cool bit of the question is actually part two, as, they totally have.

– The Bitcoin scaling debate and people arguing about the size of blocks.

– Miners in the PoW space hoarding and selling transactions to make money.

– DPoS systems close off openness in networks to allow closed groups to distribute profits to themselves.

– DAGs and other structures losing important features like universal broadcast in the name of scaling.

– 80+% of ETH transactions being gate kept by Infura…

Q2:Could you tell us about your Saito arcade, is it some kind of game?

There are a bunch of games available on the arcade.

We initially built them to show off what the network can do. The interactions in games can be super, super complex, often more complex than in business applications etc.

I wanna test it, it seems like a trend for the blockchain games.

Q3: Please tell us more about use cases on your chain, it seems the most important thing for network

A great example to understand the kind of thing that Saito can do is:

Imagine you have an IOT security camera you set up to watch your house or family.

Anything like that, – now, – requires a third-party company you just have to trust won’t look into your stream. With Saito you can very simply set a wallet on the camera and on your phone. To connect – the phone just sends the camera an on-chain message, with its location on the open Internet and its part of a key swap.

The Camera sends back info about where it is, and it’s half of the key swap.

The Camera can now encrypt a stream – off-chain – and send it directly to the phone.