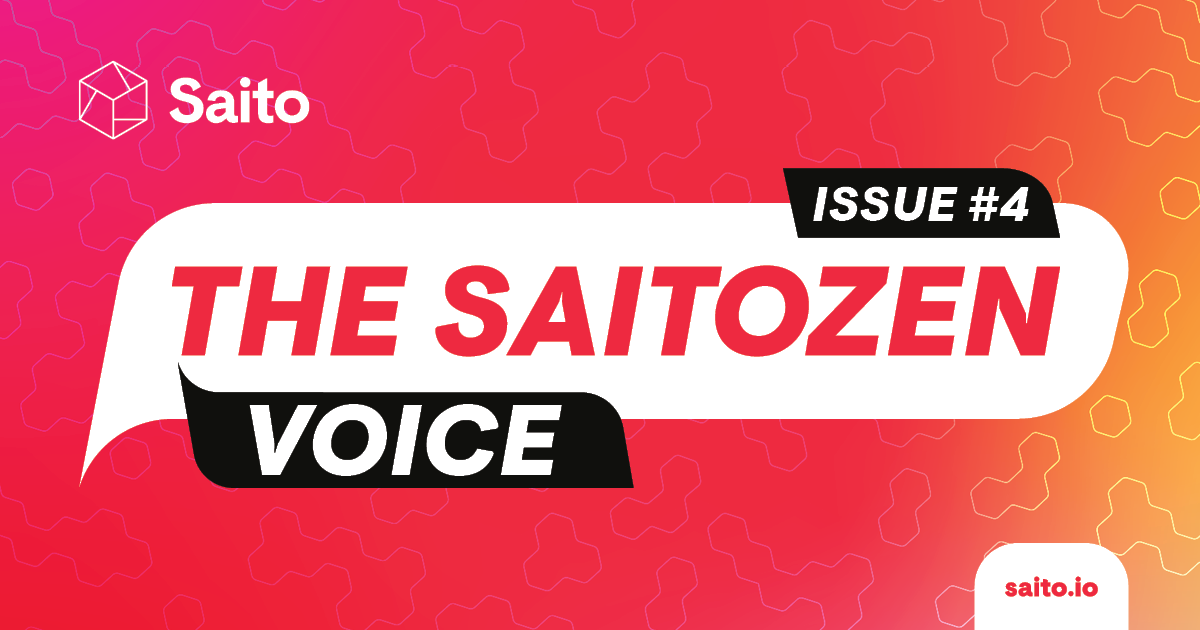 Welcome back Saitozens! We are here once again to bring to the forefront the best of the discussions happening on the bastion of culture and wisdom that is the Saito community, let us get right into it:

Would someday other dev be able to use the Saito blockchain to create their tokens in the same way Ethereum and BSC are used today?

A smart contract EVM is really just an application that runs on a blockchain. Install the EVM atop however many nodes you want and they can process transactions set to specific addresses as inputs to contracts.

That stuff runs naturally L2 on Saito. When will we get around to this? That really depends how it falls into the hierarchy of things that needs to be done and when it becomes a priority. Definitely not soon in my opinion. We can chat about this in the townhall if people want.

You explain Saito as a solution to problems that other blockchains don’t even recognize as problems. From what I hear/read, I think e.g. Vitalik is a very smart guy within the Ethereum space. Why wouldn’t he see these problems? Are they really that much of a “thing”? Will they be in the long run?

What the ETH guys tend to do is see a problem with POS, notice it exists in POW, and conclude it must be a universal problem. Practical examples of this are the “scalability trilemma” and “sheep-and-wolves” problems.

Vitalik has written about some economic attacks that Saito solves, particularly discouragement attacks. He doesn’t wade down to the economic level very often, perhaps because — as he wrote on that occasion — these classes of attacks are “a cheaper way of attacking a consensus algorithm” and “one of the hardest classes of attacks to come up with defenses against.”

The question I’d ask is why has there been zero progress on those problems in the last three years and if the ETH guys consider these problems a priority? As far as I can tell, what they do is declare the problem as unsolvable in order to remove it from the list of things they need to worry about. The scalability trilemma has been invoked to justify practically every bad design decision ETH has made.

Part of the problem is lack of understanding of actual economics. But part is that when development communities attract people who see economic problems as technical problems they attract “experts” whose solution is central planning.

In Plato’s cave, Socrates explains how inaccurate perceptions of problems within Blockchain lead to complacency in addressing them. Only by actively seeking out the truth can one arrive to the wisdom that is Saito

What are the weaknesses/downsides of Saito? I understand some of the downsides of BTC and ETH (or rather PoW/PoS blockchains) – and I can’t quite believe that Saito is as perfect as you say it is. I want to, but I’m still skeptical could you expand on that?

I’ll answer your question as best I can, although my experience is that when people ask this question what they often want is reassurance that Saito exists in the same spectrum of “technical trade-offs” as other projects. So before I answer with something specifically, I want to comment on why this is not true, with reference to what was new about Bitcoin.

Before Bitcoin was invented the trade-offs that applied to early forms of “digital money” were caused by the fact that the interface with the objects that held real value were outside the control of the networks themselves. You needed trusted third parties to handle the interface with those assets, and usually also the government to sanction them having access to the banking system. Bitcoin “solved” this problem by putting the “value” in the system under the direct control of consensus. The “trade-off” space that existed previously no-longer applied because there was no need for a trusted-third party to manage the money-interface.

Saito does the same thing with cost-of-attack. The addition of cryptographic routing sigs allows our consensus mechanism to increase the cost of producing blocks (and collecting payments) so that it is always expensive for people unless they are using work generated by fees that have been paid for by other people.

The trade-offs that exist in PoW and PoS exist because they have external markets for work (hash/stake) that permit costless transfers and anonymous laundering of work in ways that enable economic attacks. Saito changes the game in the way that Bitcoin did — something that used to exist outside the network (cost of attack) — is shifted in Saito and put under the direct control of consensus itself. Economic attacks disappear because the consensus algorithm can see when it has been transferred and assigns a penalty that you can only ignore if the fees don’t come from you.

The hardest technical problem happens if we assume that people are willing to burn money to attack the blockchain. At this point PoW and PoS are dead, and it isn’t clear why Saito needs to worry about economic irrationality and no-one else does, but let’s take this seriously.

Some people will argue that the security of PoW is driven by the fact it is hard to purchase miners (i.e. pretending that hash-rental attacks or miner-collusion is somehow off the table). I don’t personally buy this story at all — if the supply curve of hashpower is what keeps PoW safe then we can expect PoW security to collapse as the block reward falls and the R&D costs of producing more efficient miners require more and more money over time (see CPU market).

But what if it’s true in the short run?

Saito addresses the problem by using routing policies to force attackers to produce blocks in sequence (spamming your peers with blocks at a specific depth doesn’t get them routed, so it isn’t a viable attack). And we require chains to have a certain number of golden tickets per N blocks in order to be considered valid — so that it isn’t just a matter of spending money. You also do have to burn hashpower.

The fact that we require a certain number of tickets per N blocks (rather than every block essentially being a golden ticket) means that the cost of spamming the network is lower at the tip of the chain than in other networks. Or potentially lower, because higher fee throughput and scalability means that there is more money to pay for the golden ticket mining.

Why did no other blockchain come up with a similar solution?

Why did no-one else come up with Bitcoin? This isn’t an easy problem to solve. And the solution is counterintuitive — it requires both the cost of and payout from producing a block to float according to information that does not exist in POW and POS.

And you have to solve two problems, because what is the use of scaling routing if you’re stuck with a permanent ledger?

Do you fear someone else implementing your ideas faster?

David: My last business in China was copied. So – yeah – I used to be afraid of going out and talking to people and trying to get them to understand and then just being copied and jettisoned. That was one of the big reasons for the patent application.

These days I’m a lot less worried. It’s legitimately hard work to think through the mechanism and most people are lazy. And someone copying us would probably be good for us and we would outcompete them anyway.

When you meet a friend, scan a QR-code on their phone to get their publickey and add them as a friend in your keylist. Use Saito to run a Diffie-Hellman key exchange over the blockchain. There is no MITM attack. Do this with 500 people? Have them create off-chain spontaneous communication channels over IP. If you need group encryption you can do N-player Diffie Hellman key exchanges so everyone in your group has the same encryption/decryption key. Replace wechat/facebook/telegram/whatever. Use plain TCP/IP communications for most data-heavy actions. Retreat to on-chain communications for payments and for things like IP-address updates that are hard to handle otherwise.

This sort of thing is possible in any network where people can communicate and exchange signed messages. But to be useful it needs to be scalable, as we’re sending a lot of transactions. You’re definitely not going to build a decentralized version of wechat on a network that can’t break 100mm transactions a day.