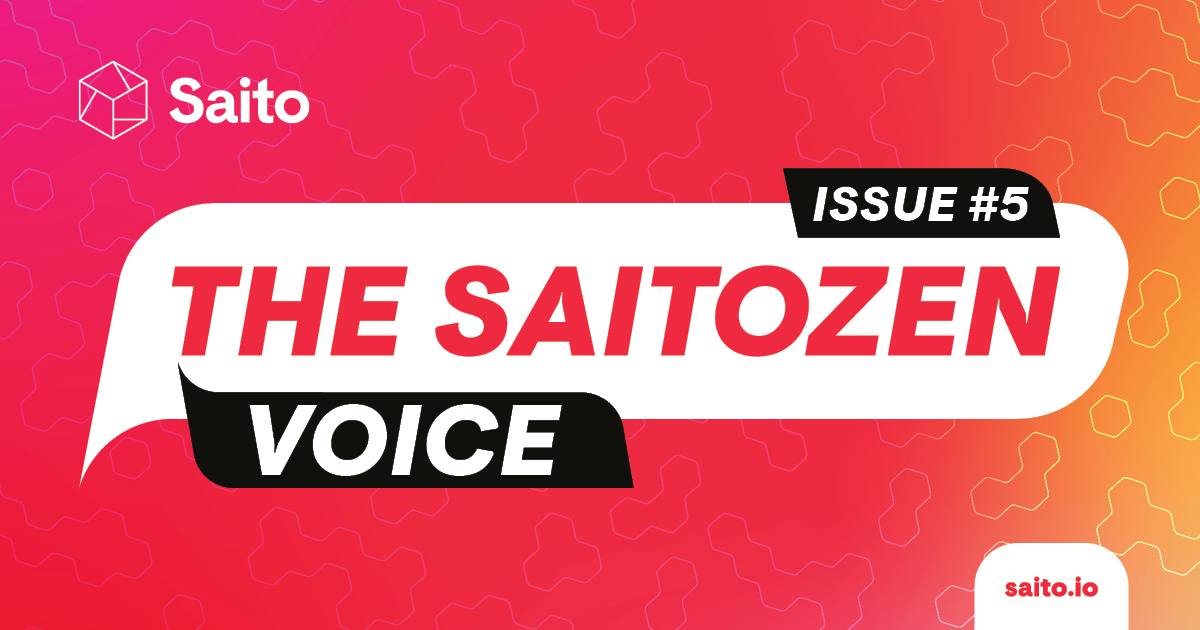 Welcome back Saitozens! This time around we are going back to the basics behind the workings of the Saito Network, let us get right into it:

I’m having trouble wrapping my brain around the issues that SAITO solves, and it’s primarily because I’m unable to relate it to real life examples of how things are traditionally. Can anyone explain it to me like I was born in the 1950s?

Try to think of a business model that will pay for the network infrastructure nodes to serve data to users and collect fees for miners/stakers that doesn’t increase fees, lower security, or introduce cartels and monopoly economics. Try to find a business model that makes for-profit firms behave like volunteers. There isn’t one.

The free market HAS to add closure to anything it pays for, because otherwise you have a public good and market failure. But closure makes a blockchain pointless and uncompetitive.

Saito fixes the problem by noticing and fixing the underlying problem: the fact that participants are incentivized to do only a subset of the stuff we need done. Suddenly an open consensus algorithm can provide all of this network activity without the need for the free market to fail-to-provide or provide-but-cartelize it.

The solution requires switching to measuring and paying for the collection of money. The challenge is giving this activity the security properties of Bitcoin since we are now burning money directly instead of indirectly through hash power.

I know this is discussed in the whitepaper, but I am wondering what exact purpose staking serves in consensus? Is it just extra security?

Classic Saito assumes we have a golden ticket every block. But we can’t guarantee that because golden tickets are found in a random process that involves hashing. And any difficulty which produces an average of 1 solution per block will sometimes produce 2 golden tickets per block and sometimes 0.

Assume we have 50% of the blocks dropping off the chain without a golden ticket. Either;

The blocks that aren’t paid out immediately get paid out when the next golden ticket is found.
If a golden ticket solves payments for 2 blocks, the random number is now picking 4 winners (miner, router, staker, staker-block-router). Even though the network is spending a smaller percentage of its overall revenue on hashing, generating a golden ticket that pays you off (your routers, etc.) at profit becomes exponentially more expensive.

The beautiful thing is that the cost-of-attack rises above 100% of fee throughput in most situations. I think our expected cost-of-attack is currently 125%. The cost-of-attack falls to 100% (i.e.an attacker can at best recapture all of the money they spent) in the situation where the attacker controls 100% of the staking table.

Basically, staking is treated the same way that mining is — a mechanism to pull funds away from block producers rather than as something that controls the pace of block production. Very different than POS.

And we obviously don’t lead with this, because if people don’t understand Classic Saito, they won’t even have a clue why you might want to do this (and most people can understand the mechanism without seeing this potential problem). Shorthand benefits anyway:

Can we do anything with the Rust client yet? if I run it on my local machine, would there be any way to interact with it in a browser app or something?

It’s a bit unclear how much effort that will be, the TX and block format has changed so Saito-lite will need significant changes. It may also be possible to simply interact with Rust at the network level. But you’d need the other side of the connection to at least be able to serialize/deserialize blocks and TXs and sign TXs.

Are there more exchanges listings in your roadmap? is any work happening in that front?

Yes, we are in on-going discussions with exchanges. As noted previously most exchanges will list projects for a fee and some kind of distribution for their users. That obviously negatively affects token price. The size of these fees and distributions is generally bigger with bigger exchanges (we have been listed by some smaller exchanges without action on our side). Exchanges also tend to reduce or drop these if there is sufficient trading volume, or buzz around a project.

I think there is also an assumption from some that an exchange listing necessarily has a positive impact on price. This is not true. Without promotional and outreach support a listing does nothing. So, we need to balance how we spend money and time between promoting the project and growing our community and lobbying exchanges.

Can new Saito tokens be minted or are we fixed?

There’s a multisig around the smart contract. it is possible to mint more although it isn’t unlimited as burning is required to withdraw to mainnet and there can never be more tokens in existence that exist in the token supply.

Total token supply is fixed at 10b long-term on mainnet, and the network is intended to be zero inflation and zero deflation.

That isn’t a promise that there will be 10b tokens. But it is a promise there will not be more. In terms of the ERC20 everything involving it is publicly visible. Will say that if we were interested in rug pull, we would be doing things quite differently and I would be doing a lot less coding.